What you can see

Ancient Sougia flourished during the Roman and Byzantine era, and it was the port of the Doric city Elyros,which in Ancient times prospered with its own gold coins,but it was destroyed by Saracens Arabs   in the 9th century.

Elyros was near the modern village of Rodovani. From ancient Sougia few ruins remain nowadays on the    eastern side 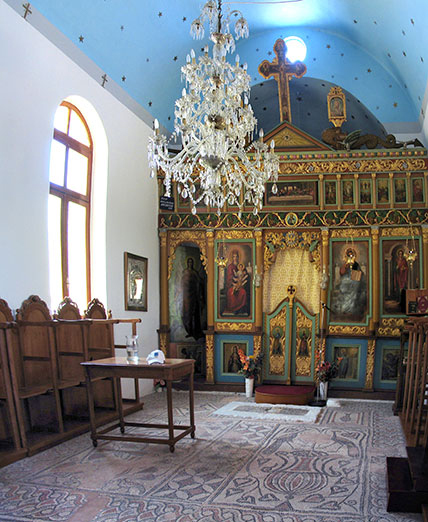 What is worth visiting is the church of Saint Panteleimon on the west boundary of the village with magnificent mosaics on its floor. The representations on the mosaics are of unique art, and depict pictures of nature ( flowers, peacocks, wild animals)and belong to an older church in the 6th century, where the present temple was built. lf you want to get into the church , you must ask us to give you directions how to get the key ,because the mosaics are of great value and the church is locked.

From Sougia there is a path which in 1 hour and 15 minutes will take you to the city of Lissos, the second port of Eliros. Lissos was famous for its Temple of Asklipios where people came from all over Crete to be cured. At Lissos there is  little church dedicated to Agios kirikos, (St Kirikos), whose feast-day is on 15 July. On the previous evening, worshippers arrive here either along the path or by boat from Sougia, stay overnight, attend  the service and enjoy the festival that follows. St Kirikos was put to death at just three years old together with his mother St Julitta, by the ruler of the city of Tarsus in Asia Minor, during the great persecutions of the Christians under the Roman Emperor Diocletian.

You visit the church of Agia Irini, (St. Irene)on the outskirts of Sougia. Walk up to the end of the village to the port (on the west). From here the asphalt road starts which takes you to Chania. Going along this road you will come across a dirt road on your left which goes uphill above Sougia.

The mountainside is covered in pine trees, and as you climb you’ll find yourself stopping more and more often to admire the view of Sougia and the blue sea from above .

After half an hour’s hiking you will come across a small but beautiful byzantine church of of Agia Irini .If you have a four wheel motion jeep you can get there but believe me , the view, the beauty and the peace of the place will make up to you for the sweat of the hiking.
Note that on May 5 a great festival is held here with food and singing.

Walk along the gorge of Agia Irini. Get on the morning bus, which will take you to the village of Agia Irini in half an hour. From here the green gorge starts and ends up to Sougia. The route is easy and you will need approximately 3,5 hours..

Cross the famous Samaria gorge.Take the early morning bus going to Chania. On the way (near Rodovani), the driver will let you off to catch the bus coming from Paleohora and going to Omalos. Cross the Samaria gorge and after 6-7 hours you will reach the coastal Agia Rourneli, from where you take the boat back to Sougia.

Take the boat to Agia Roumeli and walk the «lazy way» in the Samaria gorge, which goes up from the mouth of the river up to the Iron doors (Sideroportes), the narrowest point of the gorge. You will return to Sougia in the afternoon in the same boat.

If you find yourself in Sougia on 19 July, you can join in the festival of Profitis Ilias  (Prophet Elias), celebrated on 20 July. The faithful take the boat to Trypiti beach (east of Sougia) the previous afternoon and then walk up the path leading to the chapel of Profitis Ilias, 400 metres above the sea. After the service they spend the night there with music and feasting, returning to Sougia the next day.

At a distance of 2.5 km. at the east side of Sougia, following the E4 path, is the area called Charei, the beach of Saint Anthony.
On 02 July celebrates the church of St. Anthony and Our Lady Chilioarmenitissa located there. If you are in Sougia on 01 July, you can visit the homonymous church situated among the pines, at the east end of Saint Anthony beach. On 01 of July every year a large festival associated with the saint’s name day is held and guests arriving by boat or on foot and overnight on the beach.

Nearby the vilage Moni, you can visit the Panagia Kera (Chapel of Holy Mary), built in the early 19th century as a Nun’s Monastery, it is a unique monument of rural architecture. In the Chapel’s surrounding area, the visitor could admire an impressive stone-built 20-meter-tall bell house with amazing view from the top as well as the cells that nuns used as their homes. Besides the unusual tower, which in itself is worth seeing, you should also admire the beautiful, carved wooden iconostasis inside the church. The Chapel celebrates on 8 September.